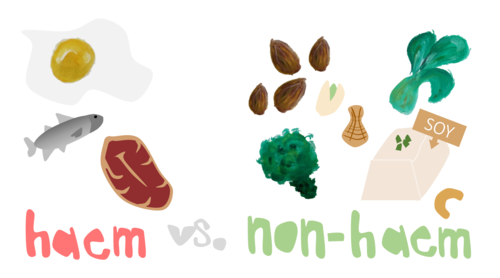 Iron is an important nutrient. It plays a key role in many of the bodies’ functions including growth, development and appetite regulation. Iron transports oxygen around the body, making it an essential mineral for sustaining life.

When the body doesn’t have enough iron children may have difficulties in concentrating, they may be easily fatigued and/or they may have a small appetite. Low iron levels amongst pre-school aged children can also impair their cognitive abilities (1). Simply put, if iron levels are low children and may find it difficult to concentrate, difficult to learn to their potential and difficult to eat the right types and amounts of food their young body needs.

Who is at risk of iron deficiency?

How is iron deficiency discovered?

Iron deficiency can only be diagnosed by having blood tests. A General Practitioner (GP) can arrange this test.

It is important to have an accurate diagnosis before taking an iron supplement as an excessive intake of iron from supplements can be toxic to the body.

Commonly considered “symptoms” of iron-deficiency such as pale skin, dark eye-lids, fatigue and/or white spots on finger nails ARE NOT accurate in diagnosing iron-deficiency. 

How can iron deficiency be prevented?

The prevention of iron-deficiency involves a combination of:

How is iron deficiency treated?

Dealing with iron deficiency involves a combination of medical and dietary interventions. Unfortunately a diet rich in iron will not be sufficient to “un-do” iron deficiency. After a diagnosis of iron deficiency doctor will make recommendations about starting a suitable iron supplement. Iron supplements range in dosages and forms so it is important to select the right type and take the right amount. During this time it is important to ALSO eat a diet rich in iron. A dietitian can help you to understand what this is and also provide strategies for providing it to your child. Usually after about 3 months a doctor will arrange blood tests. If there has been a good improvement in iron levels most people can then stop taking their iron supplement IF they are eating good amounts of iron everyday.

Dietary Iron- What, How Much and When?

There are two types of iron in food. Haem-iron from animal foods such as meat and poultry. Non-haem iron from plant based foods such as legumes, nuts, seeds and tofu. Haem iron is easier to absorb than non-haem iron.

The amount of iron a person needs depends on their age, gender and if they have a deficiency. Children (without iron deficiency) need:

Due to a “weaker” absorption, a person eating only non-haem sources of iron needs about 1.8x more iron than those eating animal sources.

As iron is used by the body everyday, dietary iron needs to be consumed regularly.

Dietary iron needs to be included from 6 months of age and should be included throughout the lifecycle. Eating foods mainly from the core-food groups helps to ensure that toddlers, children and teens are including iron everyday.

Tips for an iron-rich diet

If your child is at high risk of iron deficiency; has been diagnosed with iron-deficiency or you have concerns regarding their overall intake Contact Us today