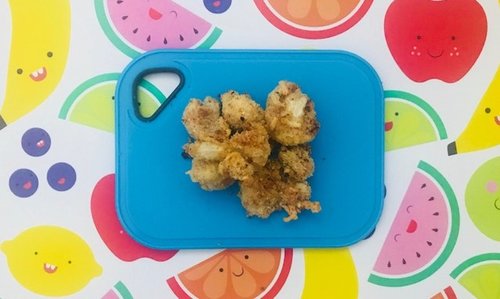 On its own, cauliflower isn’t a vegetable kids often run to. It has a bland taste to which young palettes are often not accustomed to. However, this blandness together with it’s versatile shape and structure mean it’s a great “blank canvas” for creating tastier, more appealing recipes that the whole family can enjoy.

This recipe is also great for encouraging selective eaters to expand their food repertoire.  With a crunchy outer layer and soft inner these cauliflower nuggets have a similar texture to baked chicken nuggets or fish fingers. Cauliflowers can be found in white, purple, green and even orange varieties making a great “challenge” for a child who might have a preference for white or blander looking foods. As always, it’s best not to try and “trick” your child into thinking these are chicken nuggets (or whatever their favourite menu item might be). That tactic will only last until the point that their taste-buds kick in (and risks them spitting it out through the shock of a flavour other than what was expected). Instead build their confidence to try through the use of descriptive language (e.g. “these have a tasty crunchy shell, they remind me of chicken nugget”), role modelling (this means parent eating them too!) or even getting them involved in the cooking process (the dipping and coating steps could be particularly fun). Remember this goal isn’t always to consume the whole product; see a licking, biting and tasting as “wins” when supporting a selective eating and be sure to given them another opportunity to try the food within a week or so.

** dried herbs and spices such as mixed Italian herbs, paprika, pepper or Zaatar can also be added as desired

3.       Steam cook the cauliflower until just tender (do not overcook)

4.       Transfer the cauliflower to a large mixing bowel and stir in the egg

5.       Combine breadcrumbs and cheese in a different mixing bowl (and dried herbs if you’re using them)

6.       Add the cauliflower to the breadcrumb mixture

7.       Toss the cauliflower through the mixture coating each floret