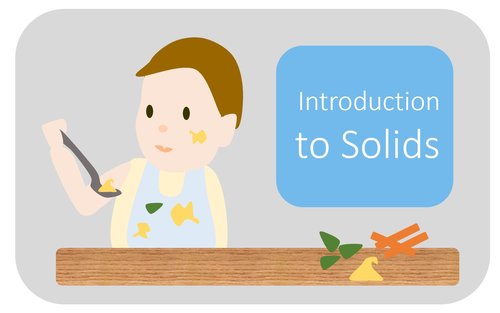 When it comes to nutrition (and many other things for that matter!), the first year of a child’s life can be an exciting, challenging and confusing one for parents. In the space of a few short months, infants will progress from being fully dependent on breast milk or formula to eating a wide range of family based meals. There are some key points to know about the when, why and what of complementary feeding (aka introduction of solids).

In recent years there has been changes in recommendations and what is considered the optimal time for introduction. These changes are mainly due to new and, what is now considered more accurate and appropriate science.  In Australia the current recommendations are to introduce solids around six months of age, but not before four months of age. In short, sometime between 4 months and 6 months is good timing.

Delaying the introduction of solids (generally considered later than 7 months) places an infant at risk of feeding difficulties and allergies; poorer overall nutrition and poorer acceptance of new taste and textures in the first two years of life

It is important not to introduce solids too early (before 4 months) as this can place stress on the immature gut, kidneys and immune systems. If breastfeeding, an early introduction of solids may also decrease an infants exposure to the wonderful and protective components of breast milk. Infant who are introduced solids before four months of age have been seen to have increased rates of respiratory and gastrointestinal illnesses and ear infections.  Long-term, children who were introduced solids early are more likely to be overweight in later life . So when it comes to the of introducing solids, it should take a “not too early, not too late” approach.

From six month of age, an infant’s iron requirements can not be met by breast milk or formula alone. Iron stores built during their time in utero start to become depleted and they need iron rich foods to help meet their growing body’s requirements.

There is also a period that is considered a “window of opportunity” in learning how to eat. In practice we often seen toddlers who’ve experienced a delay in the introduction of solids, struggling to learn to eat (or eat efficiently) in their 2nd and 3rd years of life.

First foods should include iron rich menu items. Foods should be in a form/ consistency that the child can safely and efficiently consume. Salt should not be added to cooking due to immature kidneys. Honey should be avoided for the first year of life due to the risk of botulism. Infants do not have a requirement for discretionary/ “junk” foods and foods offered should be from the 5 food groups (vegetables, fruit, grains and cereals; meat and meat replacements; dairy or dairy alternatives).

To reduce the risk of allergy, egg should be introduced in the first 9 month of life. This should be provided in a cooked form with the yolk being offered on one occasion prior to whole egg. Peanut should be introduced within the first 12 months of life. A no added salt, peanut butter is a good way to introduce this.  A typically developing infant with age-appropriate feeding skills and oral intake will be eating family based meal items (with some modifications such as minced or soft cooked meat compared with steak) by 12 months of age.

Eating and food exposures during the first 12 months of life are an important part of a child’s development. Delays or deficits during this period can place a child at risk of nutritional and/or feeding problems in the longer term. It is important to rethink the notion that “food before one is just for fun” and seek support from a professional if your child is experiencing difficulties with eating or drinking; is not growing or gaining weight consistently or if you’re simply confused by the often not-so-simple guidelines around first year nutrition.